Susanna Ånäs presented Wikimaps with a position paper and a presentation in the inaugural meeting of the GeoHumanities special interest group, a group gathering knowledge on the spatial research of cultural heritage.

Gazetteers and the GeoHumanities SIG

The first one of the initiators of the SIG, Kathy Weimer (Texas A&M University) opened the series of presentations about gazetteers with Geographic name authority records in the Map & GIS Library. Gazetteers are place name dictionaries, as described in Wikipedia. This meeting was another step to make the gazetteers of different research projects communicate with one another. 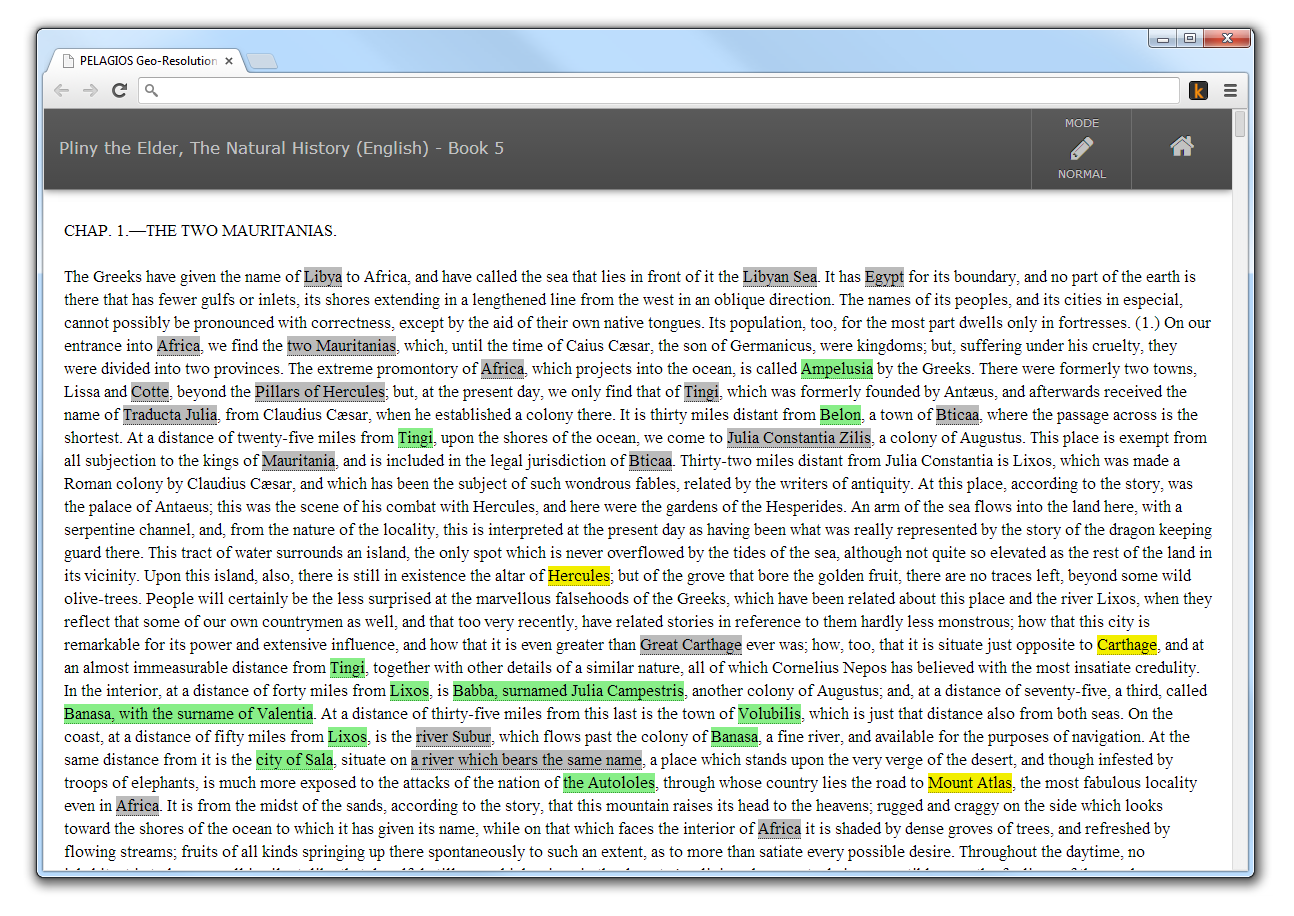 The academics working with gazetteers have largely congregated around the Pelagios 3 project. Elton Barker (Open University), Leif Isaksen (University of Portsmouth) and Rainer Simon (Austrian Institute of Technology) are carrying out the principle: “Don’t unify the model – annotate”, allowing gazetteers to link to one another without completely remaking them. A new outcome is the Recogito text annotation tool to identify and link place names.
Paper: Pelagios 3: Towards the semi-automatic annotation of toponyms in early geospatial documents

Stuart Dunn (King’s College London) presented The Heritage Gazetteer of Cyprus. It gathers place names in Cyprus from different sources into a gazetteer. Modern place names are combined with historical units and archaeological entities. The project deals with layers of challenges: different transliterations and varying ideological perspectives. In the project one place name will not be preferred over another as a default name. Another strength of the project is a rich and thick description of places names of a limited location.
Blog: Heritage Gazetteer of Cyprus: evolving thinking

Miranda Anderson and Beatrice Alex (University of Edinburg) showed the Palimpsest project that geo-locates extracts of literary works of Edinburg from the early modern period to the twentieth century. The Edinburgh Geoparser is used to georeference fine-grained place names in the texts: streets, buildings, local areas, and vernacular terms such as “Old Town.” The project tools and outcomes will be openly accessible, and imaginative events will engage participants interested in the local heritage.

Petr Pridal (KlokanTech) described the Old Maps Online service. It is an aggregator of old maps, and it displays a collection of 150 000 old maps from archives around the world. The number will rise to 450 000 with a forthcoming update. Future directions include even stronger support for touch devices, transcription tools for place names and support for linked data formats, such as JSON-LD. Search engine optimization for old maps is a great idea: Typing ”old maps of Lausanne” the Google search will find the maps directly. New features for georeferencing maps are being added to the Georeferencer tool that accompanies Old Maps Online. Using OpenHistoricalMap for vectorizing old maps is also being considered.

Humphrey Southall (University of Southampton) presented one of the Pelagios 3 network projects, the PastPlace. In GIS gazetteers have been seen simply as lists of geographical names and coordinates. In the past gazetteers were far richer: place encyclopedias, describing localities and their relationships with other geographical entities. PastPlace has set out to prove the use of Wikidata as a gazetteer. It includes places from Vision of Britain Through Time. Only those that have a Wikidata entry are included. The aim is to make entries for the missing ones.

Karl Grossner (Stanford University) has worked extensively on Topotime together with his colleague Elijah Meeks (Stanford University). Contrary to representing time with ISO-8061 standard dates for start and end dates, the proposal sets out to express more uncertain dates like: “for 6 months before the war,” “around 1832,” or “during harvest seasons in her youth”. The project produces a specification for representing temporal entities typically found in historical texts, and some relationships between them. The authors have created graphical timeline layout programs to parse and render Topotime data and software tools to create Topotime data from excels and whatever the researchers happen to have.
Paper: Topotime: Representing historical temporality

Eric Kansa (OpenContext), Adam Rabinowitz (University of Texas at Austin) and Ryan Shaw (University of North Carolina at Chapel Hill) introduced us to the Period-O project. The project creates a gazetteer of periods in history, art history, and archaeology. Instead of aiming at consensus about national and scholarly boundaries about the spatial and temporal coordinates of specific period concepts, the project proposes the construction of a Linked Data gazetteer of authoritative claims about the spatio-temporal coordinates of periods.

Asanobu Kitamoto (National Institute of Informatics, Japan) and Yoko Nishimura (Toyo Bunko / JSPS Research Fellow) have worked on The Digital Silk Road project. It tries to make sense of incorrectly recorded geographical data by comparing several sources together. Locations are unfolded one by one, looking at local constraints, without trying to serve the overall co-existence of items on the map. Mappinning is an interactive tool that lets the user view the map with and without the transformation alternatively.
Paper: Data Criticism: General Framework for the Quantitative Interpretation of Non-Textual Sources

The host organization EPFL is the home of the Venice Time Machine project. The project has set out to digitize the 80 km of documents in the Archivio di Stato of Venice: birth and death registries, architectural and urban plans, maps, travel guides, treaties etc. There are a hundred scholars working on the project’s different aspects. Apart from re-creating social networks and family trees, novel challenges are tackled. Handwritten manuscripts are automatically read using new algorithms. Scanning a book without turning it’s pages may be possible using a particle accelerator. Frédéric Kaplan, the innovative director of the project, called for Google Maps of the past in his popular TED talk: “Can I add a slider on top of Google Maps and just change the year, seeing how it was 100 years before, 1,000 years before?”

Bethany Nowviskie‘s keynote Digital Humanities in the Anthropocene was presented by Melissa Terras, as Bethany was unable to be present. The dark-toned keynote painted a picture of the humankind at the brink of ecological destruction, and discussed time, preservation, degradation and loss.

Via @nowviskie a painting by Isabella Kirkland of 63 species gone extinct since 1700 http://t.co/I4k8ChyQJJ #dh2014 pic.twitter.com/ruxjthPGBQ

Bethany Nowviskie runs the Scholar’s Lab at the University of Virginia Library, that have produced tools for digital humanists. Neatline is a map storymaking tool for hand-crafted, interactive stories of a single document or a whole archival or cultural heritage collection. It builds on another open source tool, the Omeka, a web-publishing platform for both GLAM and hobbyist archival projects.

The other keynotes were given by Bruno Latour (Sciences Po), Ray Siemens (University of Victoria) and Sukanta Chaudhuri (Jadavpur University).

Interface of the Campus Medius Topography

Simon Ganahl (Department for German Studies, University of Vienna), Rory Solomon (The New School for Design, New York) together with Mallory Brennan and Darius Daftary have produced the Campus Medius project. It is a study of Turks Deliverance Celebrations held by the Austrian National Socialists and the Home Guards during twenty-four hours in Vienna between May 13 and 14, 1933. The creators use the concept of chronotope, a bakhtian literary concept of space-time, defining “the intrinsic connectedness of temporal and spatial relationships”.

A caption of the Migrant Mother by Dorothea Lange, 1936

Lauren Tilton and Peter Leonard (Yale University) and Taylor Arnold are the creators of Photogrammar, a project showing and locating images of the the Farm Security Administration – Office of War project on both current and historic maps.

Several methods were used to analyze and visualize the images. The geospatial study shows that the scope of sight was much broader than the American south. Text Mining reveals thematic similarity between the work of several different photographers. Statistical Analysis using contextual inference lets the researchers “rediscover” missing metadata, placing detached negatives in their original context. 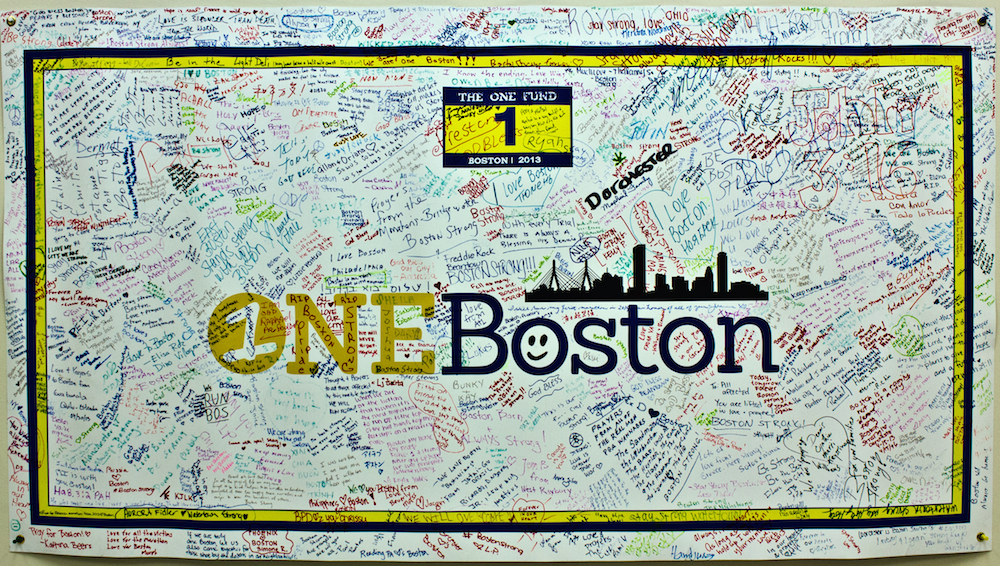 Jim McGrath and Alicia Peaker (Northeastern University) presented a poster about the Boston Bombing Digital Archive. It showcased the use of Omeka and Neatline. Stories, maps, photographs, social media logs and oral histories were collected in an endeavour that connected many different actors: universities, libraries and media companies in Boston in the aftermath of the bombing. The work was inspired by similar projects, such as The September 11 Digital Archive and The Hurricane Digital Memory Bank.
Poster: Our Marathon: The Boston Bombing Digital Archive

Here is a quick rundown of some of the very interesting projects presented at the conference:

Susan Schreibman: Revisionism as Outreach: The Letters of 1916 Project. Crowdsourcing the transcription of letters from the Easter uprising in Ireland, an event that lead to the independence of Ireland from the UK in 1922.

Mia Ridge, Brian Croxall, Amy Papaelias and Scott Kleinman: Play as Process and Product: On Making Serendip-o-matic. Serendip-o-matic is a “serendipity engine” that retrieves materials from archives around the world, based on your research library, for example. The playful Serendip-o-matic was built in less than five days as part of One Week | One Tool.

Gary Priestnall, Katharina Lorenz, Mike Heffernan, Joe Bailey, Craig Goodere and Robyn Sullivan: Reconstruction and Display of a Nineteenth Century Landscape Model. The story of a physical exhibition object, a landscape model. How it was found, and how it was reconstructed.

Caleb Derven, Aja Teehan and John Keating: Mapping and Unmapping Joyce: Geoparsing Wandering Rocks. The copyright expired on James Joyce’s works in 2012. These are the results of geoparsing and geocoding the places in one chapter of the Ulysses, The Wandering Rocks.

Marie Saldana: An Integrated Approach to the Procedural Modeling of Ancient Cities and Buildings. Procedural modeling is a way to produce architectural environments from semantic rule sets. She was the recipient of the Fortier prize for a young scholar.

Tomás Ó Murchú and Séamus Lawless: The Problem of Time and Space: The Difficulties in Visualising Spatiotemporal Change in Historical Data deals with the challenged historians encounter when trying the geographically visualize their datasets.

One thought on “The Spatial in Digital Humanities”